A recce visit prior to the shoot to see the location and meet with all the participants who are likely to appear is really important. 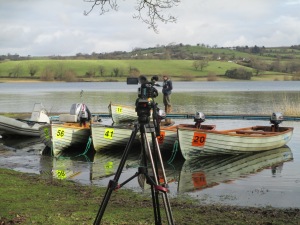 It may be necessary for all participants to sign a release form saying they are happy to be filmed and for the material to be used.  This will cover your back later should they turn round and say that they never gave you permission to use their material.  Our experience is that this is an unlikely occurrence as most people who offer support are generally the type of person not to change their mind later.

Never film people who are not happy or willing to take part.  It just isn’t worth the hassle!

During the preparation meetings you can set expectations and answer any concerns.  You should also walk the course and go round all the areas that are likely to be filmed, and then assign each area for each relevant part of the script.

This is another really important document.  An accurate timetable of the filming activities is important to share.  This will allow you to allocate time in each area which must reflect the complexities of the requirement.  This is important as it is all too easy to get sidetracked and film masses of material that is interesting to look at, but has limited space in the end film.  Having a schedule allows you to keep on track throughout the day.

Being fully prepared will maximise your shooting time.

If your shooting has interviews then you should prepare a list of questions to ask the interviewee.  Try not to share the precise list, despite being directly asked, which often happens.  We have had experience on many occasions of people learning complicated answers and then forgetting this when the camera turns on.  This can be awkward.  Try to just share the general areas of questions to allow them to prepare.  The interview should be conversational, but each question should cover one point and one point only.  It’s best to have follow up questions.  Another reason for this is that this style delivers shorter answers.  Videos these days are short so long waffling answers with mixed messages are difficult to edit.  Short questions are much simpler to deal with later.

Sadly these days you can’t just turn up and film anywhere. Security, understandably, have concerns about cameras.  Always establish who owns the building and environment where you are likely to film.  This even includes filming inside meeting rooms in corporate buildings.  These are often leased and the landlord has requirements to be informed.  This is often just a casual email but you don’t want someone turning up on the shoot and stopping the action.

Are you going to the right place?

Sounds obvious but many businesses have multiple locations and entrances.  A lot of time is wasted by turning up at the wrong place or unloading at the wrong door.  Prep work up front establishes where you should be.

Background filming is often the glue needed to illustrate most videos.  This will involve permissions of the people involved.  Our experience is that most people don’t mind being on camera, but there are folk who would rather not.  As we said before make sure that the people you are offered are happy to be on camera.

You must have public liability for any commercial filming.  Some sites demand copies of the document in advance, but it’s a good idea to carry a photocopy with you.

Any electrical equipment should be PAT tested every year and have an in date sticker on the device.  Again, some buildings demand to see what is being plugged in.  These days LED lighting has removed the need to plug in and this type of lighting is safer as there are no cables, they don’t get hot, and are easier to move around.  If you do need to run cables it’s a good idea to carry cable covers in the form of rubber mats.  Sticking cables to carpet should be avoided as this often leaves sticky marks which is never popular.

Think of your crew.  Where can they get lunch or water on the day? What other protective clothing might be needed?  Are steel toe boots needed as well as high vis vests.  Check before you turn up so necessary arrangements can be made.

Want to know more? Then why not attend one of our training workshops.  For more information go to:  www.howtofilm.co.uk

Tympani offers 4 ways of supporting you - Instructional Design for creating learning experiences, RichMedia for interactive presentations, Training you to become a film maker using iPhones or tablets and Visual Production for high quality communications from an experienced team. Our blog will hopefully give you tips and information which you may find useful when creating visual communications or presentations. View more posts

This site uses Akismet to reduce spam. Learn how your comment data is processed.